What has always fascinated me about cities and broadly speaking places I have visited is their panorama, ideally from an observation point giving me an overview, from which I like to try to spot places, buildings and monuments that I personally visited.

An orientation exercise not always that easy as it completely changes the perspectives of distances; everything seems to blend into a single urban agglomeration from which, only sometimes, easily recognisable elements emerge, allowing virtual itineraries which I have already travelled.

The skyline is the contour of an urban landscape which, drawing outlines of buildings and other architectures, defines its “line of sky”. One could call it…an artificial horizon.

Among the most renowned for magnificence and audaciousness of its skyscrapers there are the skyline of large cities such as Hong Kong, New York, Singapore or Sydney whose buildings, in some particular snapshots, seem to blend into one another like a set of geometric shapes.

The “Skyline” desk set takes inspiration right from the urban skyline of an imaginary metropolis which, despite its meticulous geometry, leaves room for fantasy and endless possibilities.

The set is composed of three office storage containers made of travertine on a walnut wood and steel base, elements that with the linearity and simplicity of their shapes seem to give form to the outline of a contemporary metropolis and, as it sometimes happens in these large cities, can be disassembled and reassembled simply by moving the different components.

A game of shapes, colours and materials that merge with balance and take us for a journey backwards in time.

Steel is the material that more than any other represents contemporaneity. It is placed at the base as if it was a road of a large city overlooked by skyscrapers made of travertine, parallelepiped refined by both its own weft and a wooden support.

Travertine is nevertheless one of the oldest stones, already used during the time of the Roman Empire; its colouring, which varies depending on the oxides that has incorporated, and the porous structure make it a material with a soul, ideal to be combined with squared shapes and more “modern” materials.

And finally wood as a connecting element which enhances warmth and harmonises the opposite characteristics of the other two materials.

Modern and ancient materials, warm and cold materials which come together and embrace creating a composition to great effect, capable of renewing itself over time according to tastes and needs.

After all even the skyline of cities can change, marking the passing of time through their transformations. Just think about the way the New York skyline has changed over the decades, even more after 9/11. 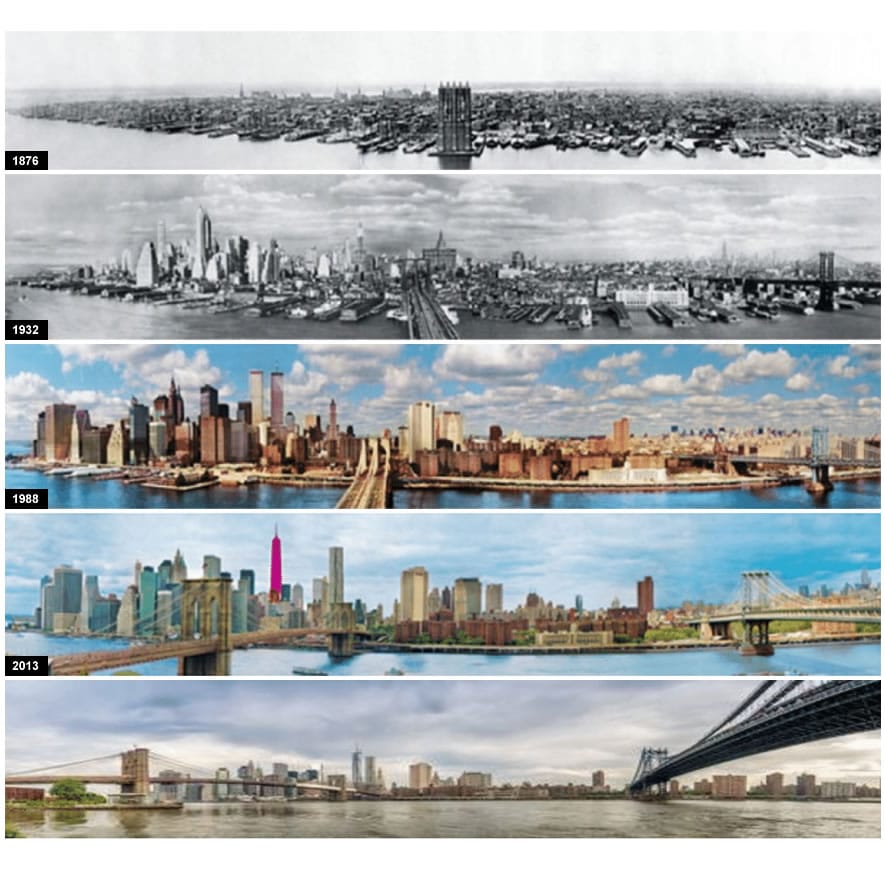 Even if in popular imagination the skyline is strongly related to metropolis, it is also true that below that thin contour which outlines the horizon there is always the work of man and nature.
Equally evocative are the skylines of Italian cities and places, more often related to landscape features or architectural elements of great historical relevance and therefore less susceptible to upheaval and transformation.

Join the waiting list We will inform you when the product is back in stock. Please leave your email address below.